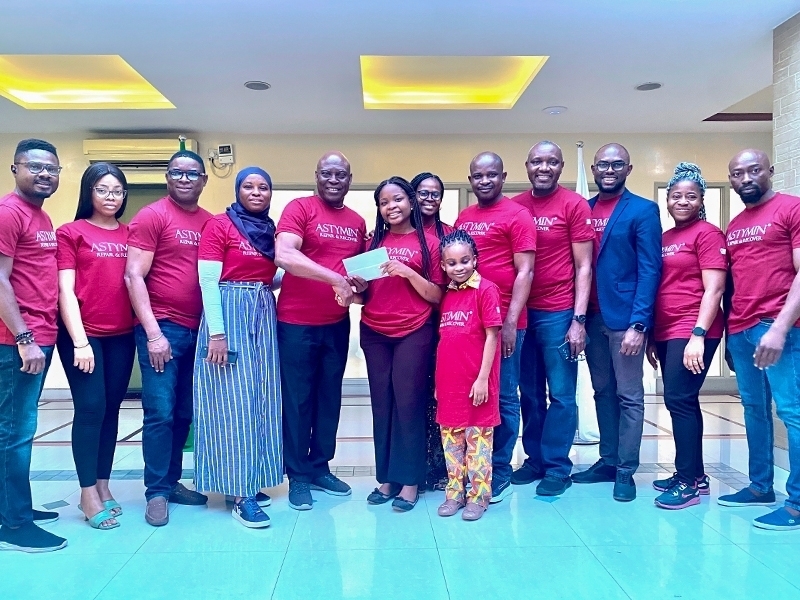 Faith Odunsi, the wonder child who rose to stardom in 2020 after mesmerizing the world with her exceptional mathematical prowess at the national Mathematics TV quiz show – Cowbellpedia – has been awarded a partial scholarship by Fidson Healthcare Plc.

The youngster, who has just gained admission to the renowned Massachusetts Institute of Technology (MIT), USA to study Artificial intelligence and Robotics was at Fidson Head Office with her family on August 12, 2022. They were received by the management of Fidson Healthcare plc., led by the Founder and Managing Director – Dr. Fidelis Ayebae.

During this meeting, Dr. Ayebae revealed the interesting circumstances surrounding how he had come across faith’s story. “I was out of the country when someone posted a video on a group that had heads of industries from around the world. They were fascinated by her talent and after watching the video, I was so proud she was a Nigerian, more so because she attended a school owned by a close friend. I reached out and he connected me to her father – whom I also knew before.”- Dr. Ayebae

Faith’s father – Dr. Afolabi Odunsi narrated how Faith rose to become Nigeria’s Queen of Mathematics in JSS 3 – a status she held for 3 consecutive years. “She has participated in several competitions across Africa and beyond, winning many of them.” He added. Faith in 2021 later represented Nigeria at the Global Mathematics Competition and won by defeating China, the United States of America, the United Kingdom, etc.

Dr. Odunsi revealed that Faith’s scholarship grant covers about 89% of the tuition for MIT and as a result, her family has had to raise the rest of the funds to actualize her dream. On hearing this, The MD of Fidson Healthcare Plc. has awarded Faith Odunsi an annual grant of 10,000 USD, as a partial scholarship for the rest of her undergraduate studies at MIT. He explained that the grant is sponsored by the Astymin Brilliance Reward programme of the company which is aimed at developing mental and academic performance among students by rewarding hard work and academic excellence.

Faith Odunsi, who gives all the credit to God and her family expressed her gratitude to the management of Fidson Healthcare Plc for the support promising to continually make the nation proud. She departed for Massachusetts, Cambridge, United States last week in the company of her family.

Caregiving
Evaluating Health Information
Tracking Your Health
Your Medicines
Health Literacy
About us
Fidson Healthcare Plc is a leading pharmaceutical manufacturing company in Nigeria. Founded in 1995, we have relentlessly pursued our goal of becoming a leading player in the pharmaceutical landscape in Nigeria and West Africa.

Our Company
Board of Directors
Our Workplace
CSR
Our Partners
Milestones

We provide excellent services including formulation/development, contract manufacturing, and production of high-quality medicines – with over 250 NAFDAC registered brands Local Manufacturing including POM & OTC Nutraceuticals and Herbals.

Shareholder Information
It provides information for investors and tools for analyzing shares and dividends. See the latest corporate reporting and financial performance.

Check out the latest news, stay informed, and find useful resources available to you.

Press Releases
Keep up to date with our news and recent announcements.

FIDSON HEALTHCARE PLC is committed to maintaining and enforcing an effective Health, Safety and Environment (HSE) program that applies to all employees and contractors. This commitment centers on the belief that all accidents are preventable..