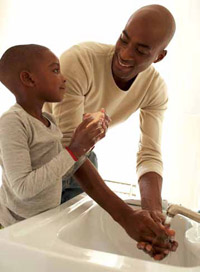 Why is cold more common in children?

The common cold is no doubt the most common contagious disease among children and it is the reason most parents would rush in and out of the hospital at so many times within a year not minding how many times their child(children) are absent from school. Children are easily infected with the common cold viruses than adults because they have not developed adequate immune responses towards these viruses. The common cold is a contagious viral infection of the upper respiratory tract. Most adults catch a cold from time to time, but children can get eight colds or more per year. The symptoms can be sometimes worrisome as they could range from stuffy and runny nose with the inability of a child to breathe comfortably, watery eyes, frequent sneezing, feeling of tiredness, loss of appetite, fever (sometimes), sore throat and cough.

Colds spread through person-to-person contact or by breathing in virus particles, which can travel up to 12 feet through the air when someone with a cold coughs or sneezes. Touching the mouth or nose after touching a contaminated surface can also spread a cold.

What Causes a Cold in children?

Most colds are caused by rhinoviruses carried in invisible droplets in the air or on things they touch. These viruses can get into the protective lining of the nose and throat, setting off an immune system reaction that can cause a sore throat, headache, and trouble breathing through the nose. Children can get sick by touching objects that have been touched by or infected by cold virus. Examples are their toys, door handles, stair railings, books, pens, video game, remotes, computers, keyboard are some common “carriers” of cold viruses. They can live on one of those objects for several hours.

Dry air — indoors or outside can lower resistance to infection by the viruses that cause colds.

What Are the Signs and Symptoms of a Cold?

The first symptoms of a cold are often a tickle in the throat, a runny or stuffy nose, and sneezing. Kids with colds also might feel very tired and have a sore throat, cough, headache, mild fever, muscle aches, and loss of appetite. Mucus from the nose may become thick yellow or green.

How Long Do Colds Last in children?

Cold symptoms usually appear 2 or 3 days after exposure to a source of infection. Most colds clear up within 1 week, but some last a bit longer.

How to Treat cold in children

Colds will usually clear up on their own without specific medical treatment. Medicine cannot cure a cold, but analgesics such as Fidson Avipol, a brand of paracetamol syrup can ease symptoms like muscle aches, headache, and fever.

Many experts now believe that there’s usually no reason to give over-the-counter (OTC) decongestants and antihistamines to any child younger than 2. There’s little proof that these medicines work, and decongestants can cause hallucinations, irritability, and irregular heartbeats, particularly in infants. However, in children older than two, cough expectorants such as Fidson Tuxil children brand can be used to soothe symptoms of common cold such as cough and nasal congestion,

How to Prevent your children from catching a cold

Because so many viruses cause colds, there is no vaccine to protect against them. To help avoid catching a cold, children should:

Experts are not sure whether taking extra zinc or vitamin C can limit how long cold symptoms last or how severe they become, but large doses taken every day can cause negative side effects.

Keeping up regular activities like going to school probably will not make a cold worse but it will increase the likelihood that the cold will spread to classmates or friends. So it is advisable parents put some daily routines aside until their children feels better.

Why is cold more common in children? The common cold is no doubt the most common contagious disease among children and it is the reason